Beautiful Florence...and living in a palace

Today we took a three hour walking tour seeing the sights of this beautiful city. The sights were varied... we walked by many places and visited others including a visit with David (the Michelangelo one!)
As the website advertised,  the expert commentary from our guide, Paolo and a great itinerary made this whirlwind tour most 'worthwhile and unforgettable'. 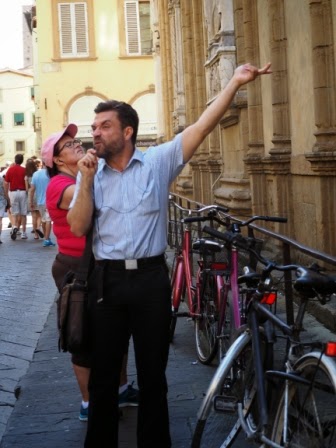 We visited David and the unfinished slave statues at the Accademia Florence...and skipped the queue. 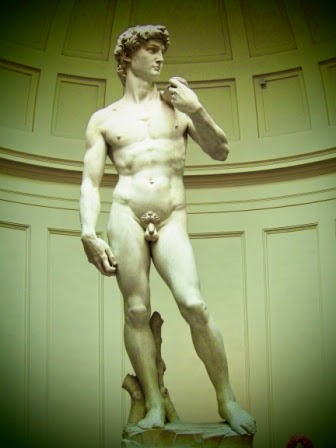 The photographs of the  statue do not give any indication of the sheer size that confronts you as you walk toward the highlighted end of the gallery.. It is seventeen foot of marble which weighs six tons. The  ceiling above David which lets in the natural light is equally spectacular.
We continued on on the Florentine heat and visited the Uffizi Courtyard, the sculptures of Piazza Signoria and the Orsanmichele Church. The Palazzo Vecchio where the Medicis resided  before they moved to the Palazzo Pitti.
It was fascinating to hear that the Medicis built a 1.7 kilometre walkway above the city for their private access from one palace to the other.
We walked through the crowds ...Paolo told us Florence has more than ten million visitors each year...and it felt as though they were all here this week.
We chanced upon a wedding in the Piazza della Signoria. The wedding couple were photographed by many people in the crowd! As it was Sunday the Duomo was closed until the afternoon but  we had walked past it yesterday in the late evening. It was beautiful and we took many photographs.
After the tour we stood near the Ponte Vecchia over the Arno River and watched the locals in their Sunday leisure activities. Their beach was a lawn with rose bushes as they watched the kayak races.

A detour for lunch to Buca Poldo which had been recommended to us in Castellina. Another wonderful Italian meal with dessert and vino at lunchtime.

I trudged  home to rest for the afternoon (we walked many kilometres again today) to escape the heat as two of the others (who shall remain nameless) hit the leather shops once more.
Kristen and I researched the history of the apartment we are staying in. We discovered we are staying in the Palazzo Antinori Brindisi...a palace  built in the fifteenth century and renovated in the nineteenth century.
From Wikipedia...
"The facade on Via dei Serragli is very simple with twin doorways on each side and two rows of simple rectangular windows highlighted by cornices on the upper floors." The entryway to our apartment is the passageway for carriages covered by vaults lowered and decorated with statues and geometric colums in imitation stone. We overlook a beautiful garden where Poggi ...from Wikipedia..."showed all his skills, magnifying the illusion of proportion to the neo-Renaissance loggia set in an elevated position reached by a steep stone staircase.
This is our apartment described on Wikipedia and is the staircase where the girls stood for the photo in yesterday's blog.
The downside ...between the four of us we lugged over one hundred kilos of luggage up that staircase! And it has to go down the steps again on Wednesday!

So the time comes to bid farewell to Tuscany...to the beautiful village of Castellina-in-Chianti, our Hotel Colle Etrusco Salivolpi, and sadly Eloisa James and the wonderful group of women who have worked together over the past few days.
I rose early to make the most of the day and captured the most beautiful sunrise.
Since the last post, we have filled our days with intense writing followed by a workshop each afternoon. The experience has been amazing and we have all grown in our writing, our knowledge of publishing and social media.
We have worked in the garden, on the terrace and on our balconies when the beautiful weather beckoned us from our rooms. Eloisa even prepared her lessons outside!
We have made many friends and are pleased that seven of us are going on to Florence today and we have already organized to meet for dinner.


Some more views of the hotel garden for you... the location is wonderful, the staff is superb and the  setting is inspirational as you can see from the photos below...

The flowers here are so colourful

Great for writing and soaking up the sun
Friday night we walked into the village for our farewell dinner together. Eloisa presented us all with a certificate of completion and a special poem summarizing all of the stories we have worked on this week. The meal at the restaurant in the village cannot be described adequately so if you are a foodie... you can salivate at the sequential pictures of antipasto, primo, secondo, more secondo and dessert below!


Saturday morning we packed up, and Siobhan and Sally  left at 6 a.m. for Arizona. Those of us who were left waited for the bus, and then we headed to Florence at 8.30 a.m. After a drive through beautiful countryside where Eloisa taught us how to recognize a Florentine villa by the cypress pines, we bid a sad farewell to an amazing woman. We have all benefited from the rich experiences at the workshop. We also must acknowledge Casja Baldini and her husband, 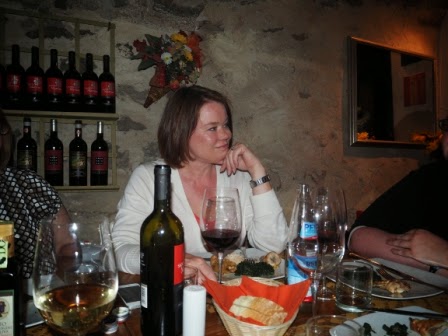 who organise the workhops. You can find out about next year's workshop here soon...https://www.facebook.com/MinervaEducation.

So Bronwyn, Fiona, Kristen and I headed for our apartment in Florence. We  are sure it must have been a palazzo in years long gone. Amazing architecture. The reception office with Mario was quite an experience.

Check the key board and the steps!

And then Bronwyn posed elegantly by one of the statues in the foyer.


We had many experiences today..but I will devote tomorrow's blog to Florence.  We ended the day with a dinner at our apartment with the rest of the group who were in Florence and a spectacular sunset.
A late evening walk.. a spectacular sunset and a moonlit path home to bed.

The past three days have flown by as we have worked hard on our writing assignments and had a personal meeting with Eloisa after each revision. Bronwyn described the instruction as 'like gold with a sprinkling of diamond dust '.
So true..I have learned more in the last week than I have in three years of writing and I hope it is reflected in future novels. We had decided to all put in and buy a gift for Elosia and present her with a handbag she had  admired. When she set off for the village to buy it for herself on Monday, there was some quick thinking and two of the girls waylaid her in an art gallery while Katrina Snow ran ahead to the handbag shop and filled them in. The lovely proprietor went along with the subterfuge and sadly told Eloisa the bag of her choice had been sold.
So to allay her disappointment she was presented with it after Monday's workshop rather than the presentation dinner on Friday evening. She was delighted with it.
It is hard to believe we are in the second half of our week of the workshop. They days are filled with writing, eating, workshop, instruction and the occasional side trip to the gelataria.
The only activity planned for today (other than writing) is a tasting down in the village after lunch. A gelati tasting that is! The flavours are exotic and wide ranging.
I have not tasted any flavour that surpasses the fig and ricotta cheese yet.
On Monday we headed off to visit an Etruscan grave (within walking distance of the gelataria). The views from the top of the hill over the village were superb and the experience of walking inside a 700 B.C. tomb was an awesome never to be forgotten one.
I expected this visit to be special but the experiences are exceeding my highest expectations. Here are some shots of the visit to the Etruscan site.

On Tuesday morning we were up bright and early to head to Siena, an hour away courtesy of Fabrizio, our mini bus driver. I rose at 4.30 a.m. to get some words down so by the time I went to bed at 2.30 a.m (more writing) after  our day in Siena...including a two hour lunch in the sun (with vino) and a nine kilometres of walking around the medieval city, I had put in a 22 hour day! You cannot miss one moment. I can sleep on the plane on the flight back home to Australia!
A taste of Siena for you...

So today will be devoted to gealti and writing, followed by our nightly visit to Il Fondaccio dai Dottori Restaurant another place where the food is divine.  The restaurant cat visits us out on the terrace.
The weather is so warm I am about to brave the icy waters of the hotel pool before writing my next chapter...
Until tomorrow...
Between blogs I am posting photographs and anecdotes on my author page. Come on over and say hello.
Posted by The Smiths at 02:23 5 comments: